Sound of Silents: How the Silent Majority Put Big Money in Charge of Washington

It’s no secret that cash is king inside the Beltway — that our leaders answer to business interests and the rich. But greedy CEOs, corporate lobbyists, and billionaire donors aren’t the only ones who deserve blame for the rise of the American oligarchy. In the 1970s, they found a newly receptive audience for their demands in the leaders of the Silent Generation — the cohort of Americans born from 1925 to 1942. As soon as the Silent Generation gained a majority in Congress, they turned their backs on regular Americans and put big money in charge of Washington. The story of how they did it has been told many times. For the first time, we’re going to show that Silents were chiefly responsible.

In Winner-Take-All Politics: How Washington Made the Rich Richer â€” And Turned Its Back on the Middle Class,Â Jacob Hacker and Paul Pierson argue that that the vast inequality now gripping America was, to a great extent, engineered inside Washington. Prior to the late 1970s, Washington had been dominated by labor unions and other progressive interest groups. The 95th Congress was when everything changed. While business lobbyists didn’t get everything they wanted right away, 1977 and 1978 brought a sea change in Washington’s priorities. Despite unified Democratic control of government and a vastly larger number of moderate Republicans than exist today…

“1977 and 1978 marked the rapid demise of the liberal era and the emergence of something radically different. Tax reform: defeated. A new consumer protection agency: defeated. Election Day voter registration: scuttled before reaching the floor of the House. Health-care reform: defeated. A proposal to tie the minimum wage to the average manufacturing wage to prevent its future erosion: defeated. An overhaul of outdated labor relations laws: successfully filibustered in the Senate…

[…] Congress passed a tax bill whose signature provision was a deep cut in the capital gains tax — a change that would largely benefit the wealthy. This followed hard on the heels of a decision to sharply raise payroll taxes, the most regressive federal levy…

At the same time, Congress and the president embarked on a major shift in economic policy, embracing the argument that excessive regulation had become a serious curb on growth. In the mid to late 1970s the call for deregulation was often bipartisan and narrowly focused. It centered on particular sectors of the economy (transportation, communications, energy). Equally important, it targeted a specific regulation that erected barriers to entry, enabling existing firms to raise prices and fostering cozy relationships between regulators and favored firms.”

These changes did not occur by accident. As Hacker and Pierson demonstrate, they were the product of a business lobby that exploded in size and strength beginning in the early 1970s. Led by the Chamber of Commerce, the National Federation of Independent Businesses, the Business Roundtable, and others, CEOs rallied around shared goals like rolling back regulation, fighting inflation, and destroying organized labor. Business groups gave to both sides of the aisle, but they found a uniquely receptive audience in the rising Silent Generation. Why? The answer lies in this generation’s archetypal character and their formative experiences.

Silents grew up during the Depression, the New Deal, and World War II. Older generations suffered through the 1930s and 1940s as workers and had good reason to distrust management, business, and capital. Silents had no such misgivings. Though their childhood was suffocating and hard, Silents entered the workforce at time of unprecedented prosperity, job security, and growth. Most Silents expected to start at the bottom of the corporate ladder and work their way to the top — a career path unfathomable in today’s economy. Indeed, William Whyte’s iconic 1956 book The Organization Man represented a perfect characterization of the typical Silent Generation worker: loyal to, trusting of, and in many ways dependent on the safety, predictability, and profitability of the modern corporation.

As technocratic careerists, Silents identified with business far more than they identified with labor — and this was true even within the Democratic Party. By the early 1970s, it was already clear that a new crop of pro-business Democrats were on the rise. As historian Jefferson Cowie wrote in Stayin’ Alive, “Certainly one of the defining features of [Gary] Hart and the new breed was, at best, an ambivalent relationship to organized labor and, at worst, open hostility…” After all, most Silents wholeheartedly agreed that, “What’s good for General Motors is good for the country.”

The rise to power of the pro-business Silent Generation played a decisive role in the epochal political shifts of 1977 and 1978. Crucially, the Silent Generation gained their first majority in the U.S. House of Representatives in 1977, and won enough seats in the U.S. Senate to sustain a filibuster that same year. As First Person Politics noted in a previous memo, when a rising generation comes to power in Washington the changes they initiate are sweeping and transformative:

When the rising generation finally becomes the majority, their preferences and priorities become decisive.Â  Majority status is often accompanied by a significant shift in the tone and political dynamics of the legislative body.Â  Members of the older generation come to be identified with the old guard, and members of the rising generation identified with the new guard.Â  Legislative and political priorities change as powerful new figures assume leadership roles and responsibilities.Â  New ways of doing things are instituted.Â  The new generationâ€™s agenda becomes the official agenda.Â  For better and for worse, politics are never again the same. 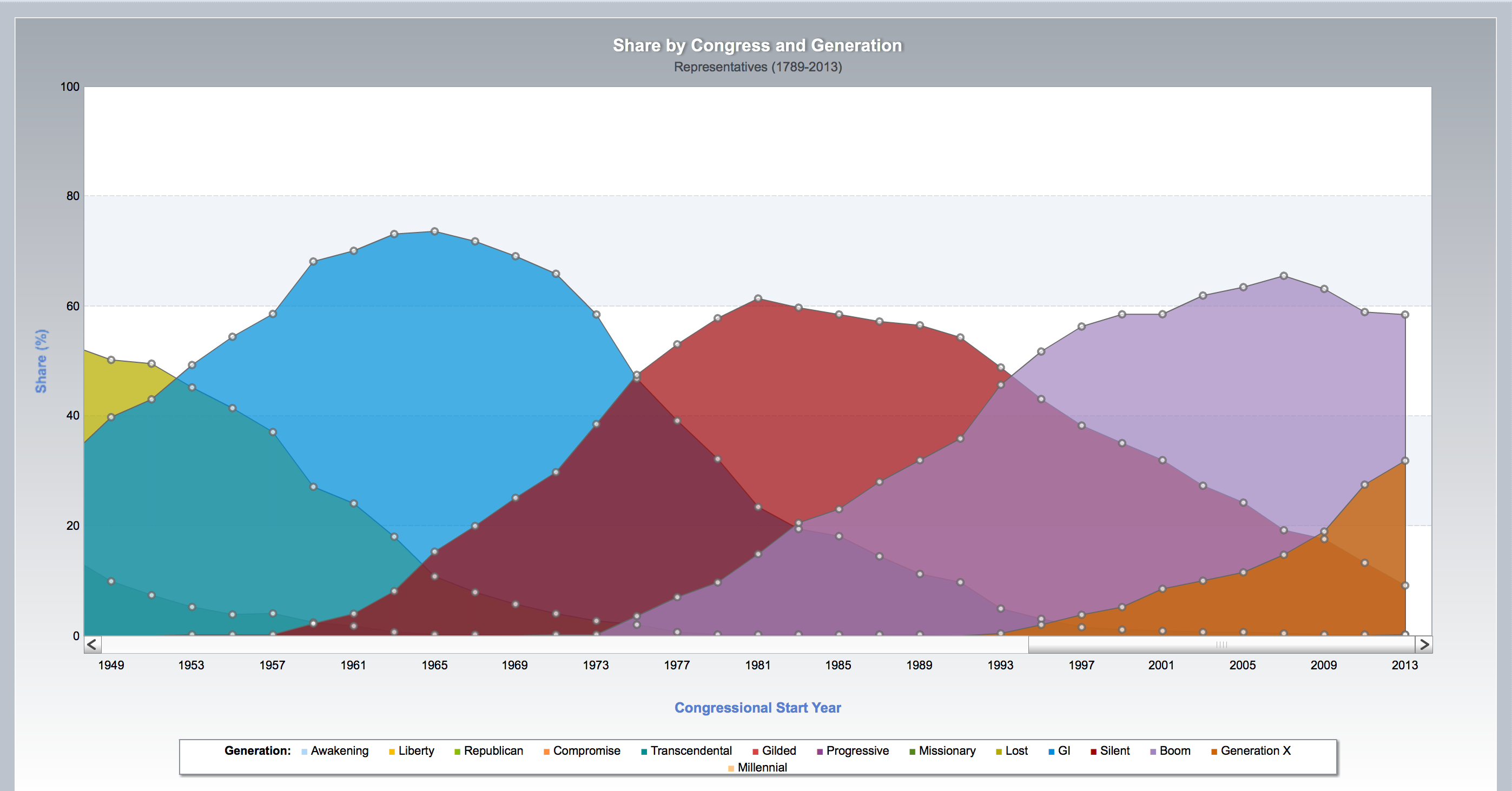 It is noteworthy that a significant shift in generational power also occurred in the Senate simultaneously. In 1975, the Senate lowered the threshold for cloture (ending a filibuster) from a two-thirds majority to a three fifths majority. From that point forward, it would take 40 senators to block a bill by continuing debate. In 1977, the Silent Generation officially crossed that 40-vote threshold. 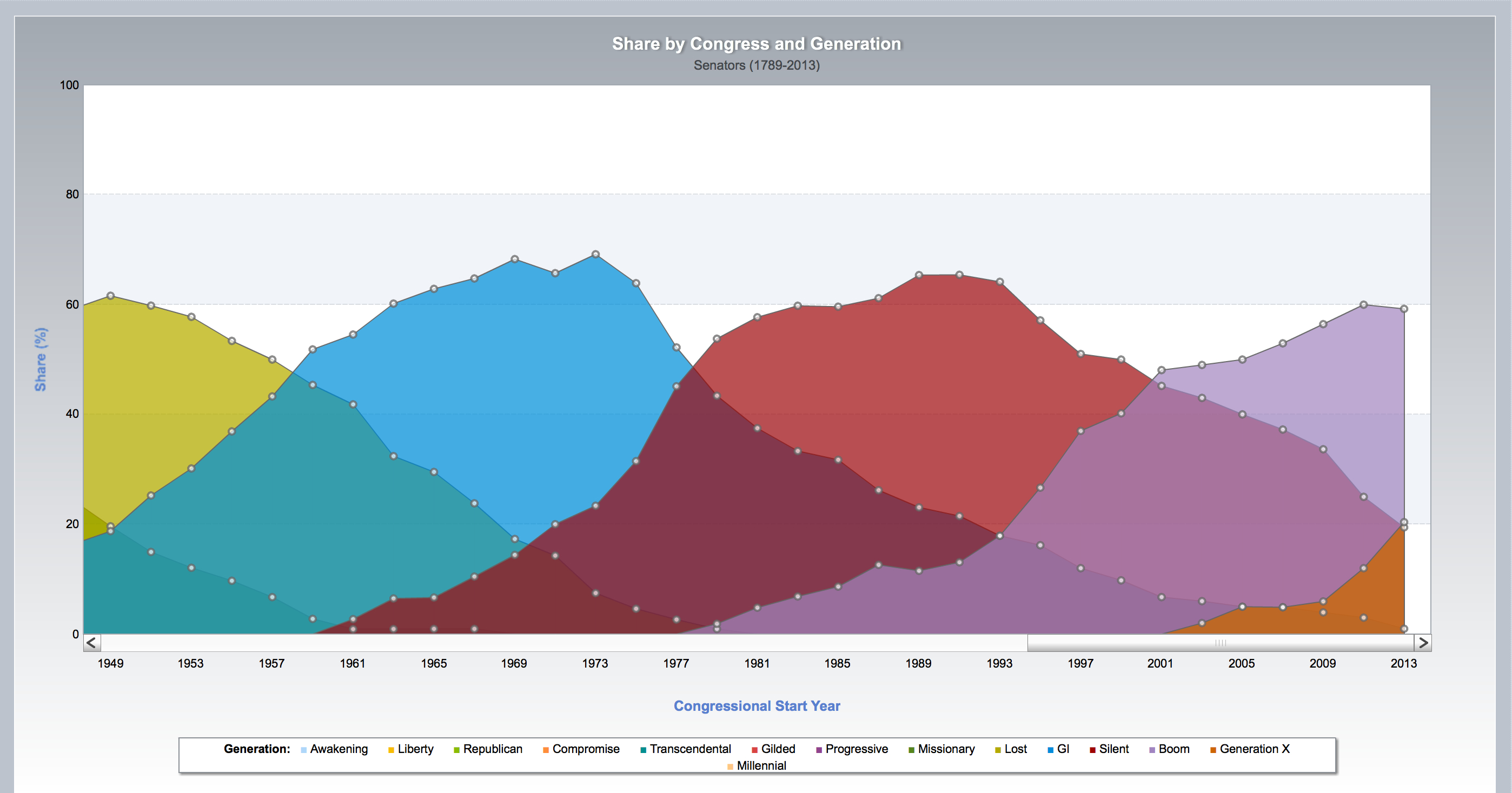 Indeed, the November 1976 elections brought about one of the biggest generational shifts the Senate has ever seen. You have to go back to the immediate aftermath of the Civil War to find a shift comparable in magnitude. For one reason or another, a substantial number of the Greatest Generation’s leaders were replaced by senators belonging to the Silent Generation. Indeed, several of those 1977 freshmen led the filibuster which defeated a major labor reform bill, seen by contemporaries and subsequent historians as a key turning point in the political economy of Washington. Just one cycle later, this determined Silent minority turned into a Silent majority.

The Silent Generation dominated Congress from the late 1970s through the mid 1990s, though their leaders continue to wield influence to this day. (As of 2014, their remaining influence is rapidly diminishing.) But in the 1970s, 1980s, and 1990s, Silent Generation leaders on both sides of the aisle initiated the tax cutting, regulation slashing, free trading, union busting, CEO worshiping, inequality exploding policies most of us know as the Reagan Revolution. Politicians on both sides of the aisle backed the same big money agenda — making the rich richer, the poor poorer, andÂ putting the American middle class on the path to decline.

While Baby Boomers can share some of the credit for the rise of inequality, the Silent Generation deserves the lion’s share of the blame for setting America on a path toward elite domination of our economy, politics, and government. This transformation began long before Baby Boomers had significant influence in Congress. Silents initiated these changes; Boomers expanded upon them — as subsequent generations often do. Likewise, the sea change in Washington occurred during a period of decline for the Greatest Generation. GIs are very much responsible for the major political developments spanning the mid 1950s through the mid 1970s, but cannot claim primary credit for changes that occurred later.

Sorting key roll call votes by generation, it’s possible to see the crucial role Silents played in the developments of the 95th Congress. Let’s begin by looking at the vote that unexpectedly blocked the establishment of a new consumer protection bureau. Representatives belonging to the Silent Generation opposed the new consumer protection agency more strongly than any other generation. In raw numbers, they made up more than half of the nay votes. As Hacker and Pierson note, “Fully three-fifths of the new class of Democrats in the House voted against the proposal.” Many of those freshmen were Silents.

The 1977 Common Situs Picketing Bill would have legalized common-site picketing for construction labor, making it easier for workers to pressure management to accede to their demands. The bill had passed in both chambers of Congress a year earlier — only to be defeated by a veto from then President Ford. Instead of quick and easy passage under newly elected President Carter, business interests lobbied against the bill — targeting many Silent-aged freshmen who appeared genuinely undecided on the issue. They found a receptive audience.

After this defeat, labor pinned their hopes on a landmark bill that would have greatly empowered the National Labor Relations Board. Although the bill passed in the House, it was defeated in the Senate thanks to a filibuster organized by key members of the Silent Generation: Orrin Hatch, Richard Lugar, John Tower, and Jesse Helms (who was born on the cusp of the Silent Generation). Despite numerous attempts to end debate, the bill never gained more than 58 votes — and was eventually returned to committee to die a quiet death. Eight of the 41 votes against the bill were cast by freshmen senators belonging to the Silent Generation. Had just two of them defected on this key procedural vote or had the same vote occurred in the 94th Congress without their staunch opposition, the bill likely would have passed.

The failure to pass the labor reform bill was understood by contemporaries and subsequent historians as key turning point in the history of business-labor relations in Washington. If unions couldn’t win a legislative fight with Democrats controlling both chambers of Congress and the presidency, they probably couldn’t win at all. When Majority Leader Robert Byrd scuttled the bill on June 22, 1978, it signaled that the tide had turned in favor of big money and big business.

The 1978 tax bill, which cut the capital gains tax in half, only drove home the point that the era of big labor was over and the era of big money was just beginning. Given the overwhelming support it received from both chambers of Congress, one might fairly ask how this can be blamed on the Silent Generation. Consider that just two years earlier, a Congress still controlled by the Greatest Generation had actually increased the capital gains tax rate significantly (for the second time in ten years). This 180-degree reversal in policy can obviously be attributed to the growing influence of economic elites. But their influence had been rapidly growing throughout the 1970s. It wasn’t until the Silent Generation gained a majority in Congress that the preferences of economic elites became decisive.

And it would stay that way, more or less permanently. The Gilens and Page study confirms that since the beginning of the 1980s Congress has responded exclusively to the preferences of business interests and economic elites. Though the study has received significant media attention, it’s just the latest in a long line of research saying essentially the same thing. Our government is far more plutocratic than democratic in character, and America started down that path in the late 1970s. First Person Politics contributes to this research by demonstrating the pivotal role the Silent Generation played in the transformation from the latter into the former.