What is ideology? Where does it come from? Why do people gravitate to one set of beliefs over another? These questions are easier to answer when informed by political psychology.

Just beneath ideology are a set of nine dispositions, perspectives or temperaments — or as we’ve dubbed them instincts. In effect, they are nine distinct psychological orientations toward the world that structure our perceptions, expectations, and demands whenever and wherever other human beings may be involved. These instincts represent our most basic assumptions about how the social world works, and that includes how the political world works. This series will introduce you to them one at a time. Let’s begin with an overview of what the Nine Instincts are and where they come from.

In human psychology there are two basic ways of looking at a public problem — any conflict or tension that arises in public life. The first way is to look at the problem through a normative lens. Normative questions ask what’s the difference between right and wrong? Which behaviors distinguish us from them? How should people behave? Which norms, values and principles ought to be accepted, encouraged and obeyed? Which should be rejected, discouraged and attacked? What sanctions should be applied to those who disobey the rules or defy the authorities that determine and enforce them?

These are all examples of normative questions. And at a visceral, psychological level, how we answer them is directly related to fear. People who are more afraid, who sense immediate danger and imminent threat, are more likely to expect and demand stricter rules and greater conformity, unquestioning obedience to authority and harsh sanctions to discourage deviance and debate. In contrast, people who feel safe and secure, who sense little or no danger to themselves and others, are more likely to expect and demand freedom of expression, remain open to new ideas, support rebellion against oppressive forms of authority and prefer non-coercive approaches to public problems.

Fear makes people repressive. Confidence makes people expressive. People in the middle of this domain are best described as somewhat anxious and respectfully cautious. Political psychologists have labeled this normative domain right wing authoritarianism or RWA. Don’t get too caught up in the name. Focus instead on the range of normative judgments it describes.

Normative ways of looking at a problem stand in sharp contrast — both philosophically and psychologically — to distributive approaches. Distributive questions revolve around questions of who gets what. How are power, material resources and social privilege allocated? Which people or groups deserve more and which deserve less? What makes one group deserving and another one not? What distribution of resources leads to the efficient outcome? Or the most equitable? Or the most equal?

Scarcity makes people competitive and dominating. Abundance makes people cooperative and altruistic. People in the middle, who experience sufficiency, are meritocratic and system-justifying: they trust in established systems to distribute and allocate justly. Political psychologists have labeled this distributive domain social dominance orientation or SDO. Again, the name distracts from the underlying meaning. Focus on the distributive judgments it describes.

After several decades worth of research into both domains, many political psychologists are starting to conclude that RWA and SDO represent the two fundamental psychological pillars of ideology. RWA correlates very strongly with a range of normative expectations, but not distributive ones. SDO meanwhile correlates very strongly with a range of distributive expectations, but not normative ones. No matter where one falls along each domain — at the high end, near the middle or at the low end — the two domains function independently of each other. They represent two distinct sets of psychological processes — called social schemas — so this theory is known in the academic literature as the dual-process model.

The material here is but a summary of that model, by way of introduction. For a fuller explanation of the model, please read Motivational Imperatives: How Psychology Shapes Ideology or watch our three part seminar series Coalitions of the Motivated to familiarize yourself with the psychology behind it.

As you may have already learned from those materials, any public problem — whether it’s a social or moral issue, an economic matter, a role and size of government question, a legal or constitutional debate, a political contest, a local dispute or a matter of international affairs — can be looked at through either the normative (RWA) or the distributive (SDO) lens. Human beings come equipped with both ways of looking at the world, but our normative and distributive lenses don’t always lead to the same expectations, even when they are focused on the same public problem. There are inherent, unavoidable tensions between the normative and distributive frameworks.

These tensions are what produce the instincts described in this series, instincts being the immediate psychological antecedents of an individual person’s ideology. The instincts arise out of the psyche’s attempt to reconcile conflicting normative and distributive expectations by minimizing and avoiding the conflict between them. Exactly how RWA and SDO are reconciled will depend upon where one falls along each domain: at the high end, at the low end or near the middle. With three elemental positions along each domain, it is possible to delineate nine composite instincts in total.

While it is at least conceptually possible to segment each domain into fewer than three divisions or more — and there are occasions when doing so might be useful — a three-by-three cross section is ideal. A two-by-two cross section faces the problem of the excluded middle: the available research strongly suggests that mid-range RWA and mid-range SDO individuals are measurably different from those at the high and low ends of each domain. These schematic “moderates” are frequently targeted in political and issue campaigns, so strategists need a model that includes them.

A four, five or six way cross section, on the other hand, would obscure too much of what highs, averages and lows in each domain have in common. But there’s also a bigger problem: at this time there isn’t enough data to support such a high resolution analysis. Individual studies may segment the domains into more than two or three groups, but the preponderance of studies do not. There isn’t enough evidence to systematically distinguish those in the 40th percentile from those in the 60th percentile of either domain. With further study, a more fine-grained analysis may eventually become possible, but for now a three-by-three cross section is all the evidence will support.

Don’t be discouraged by this limitation. Nine instincts gives us a great deal more strategic insight than if we were limited to just four. And if we had to explain sixteen, twenty-five or thirty-six instincts, the sheer number of them would most likely detract from any meaningful understanding of what they are, how they work and ways they can be used in everyday political strategy.

the eye of the beholder

This series is accompanied by a visual that will be familiar to most audiences (see below). So then what then does the all-seeing eye have to do with the Nine Instincts? The eye has traditionally been associated with divinity, freemasonry, the occult, American capitalism and, more recently, mass surveillance. But in this context, it refers to none of those things. 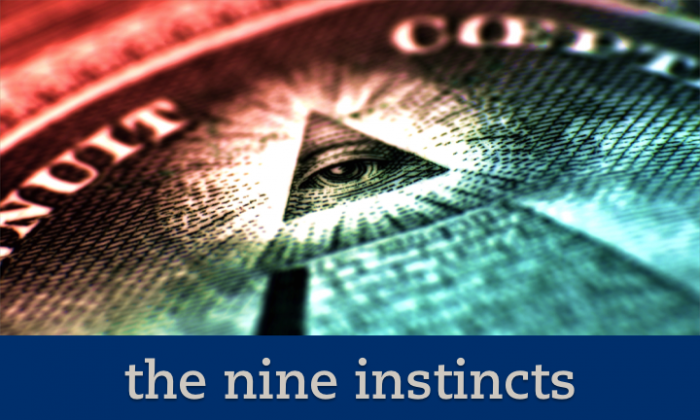 In this context, the all-seeing eye is your own. It is the symbol of the omnipresent “eye of the beholder” that lies within each of us. It represents the inescapable and inherently subjective prism of the psyche: the mind’s all-seeing eye which colors every thought, feeling, perception, sensation and action, sometimes by adding subtle hues and shades and sometimes by saturating the entire palette. The all-seeing eye stands for the first person perspective each of us brings to our lives, including politics and government.

Another way of looking at the Nine Instincts is that they are the nine axiological points-of-view that shape our engagement with the social world and with public affairs. These conflicting ways of seeing the world not only drive what we demand from our leaders and how we respond to the challenges of civic life — they even structure our raw experience of the world, right down to the level of perception. The Nine Instincts are like the rose-colored glasses we can never take off, only each person’s lenses are tinted in one of nine different colors. In a sense, we all see what we expect to see. Our high, mid-range and low positions along the RWA and SDO domains determine what kind of world we believe we’re living in and what we know must be done to meet its challenges.

Indeed, RWA and SDO donâ€™t just color our political experiences; they are fully enmeshed with our personalities, social behaviors, careers and life choices. The two schematic domains are established in childhood and engrained in the psyche as a result of repeated validation through one’s developmental and formative years. The learned expectations arising out of the two domains, upon reaching adulthood, have the full force of the psyche and all our reasoning faculties backing them up. They are not subject to rational debate or reconsideration. They are part of who we are.

The chart below names the Nine Instincts — missionaries, reactionaries, despotics, populists, conventionalists, elitists, pluralists, individualists and libertines — and shows the schematic dispositions that produce them. In the months ahead, we will examine the psychology of each instinct one at a time. The links in the table of contents below will be updated as each new entry is posted. 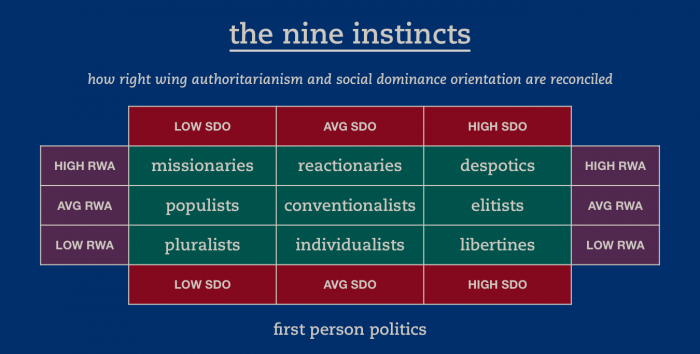