The Strategy Behind the Monopoly Man

I hope you won’t mind if I take a little credit and engage in a little shameless self-promotion.

On the morning of Oct. 4, reporters and Twitter users were surprised and delighted to discover an activist dressed as the Monopoly Man sitting directly behind Equifax CEO Richard Smith at a U.S. Senate Banking Committee hearing. The stunt enraptured viewers as the Monopoly Man was seen adjusting a monocle, wiping his brow with an oversized hundred dollar bill, and even chasing down Smith with a bag of money after the hearing.

The Monopoly Man’s appearance got more attention than anyone could have imagined, present company included. To say that it went viral would be an understatement. It was THE STORY in the press and on social media that day. The Monopoly Man’s “Ask Me Anything” chat on Reddit is now the eighth most popular of all time, surpassing similar chats with Bernie Sanders, Gordon Ramsay and the creator of The Simpsons. The character became an instant national folk hero with liberal and conservative audiences alike and made headlines around the globe.

I’m bringing this up because I’m one of the two architects of this stunt. Yes, you read that correctly: this was my idea.

To give credit where credit is due, it wouldn’t have been possible without co-conspirator Amanda Werner, who deftly portrayed (and continues to portray) the Monopoly Man. But the truth is that sending someone to Capitol Hill in costume as the Monopoly Man originated right here. It was an idea that had it’s origins in political psychology. 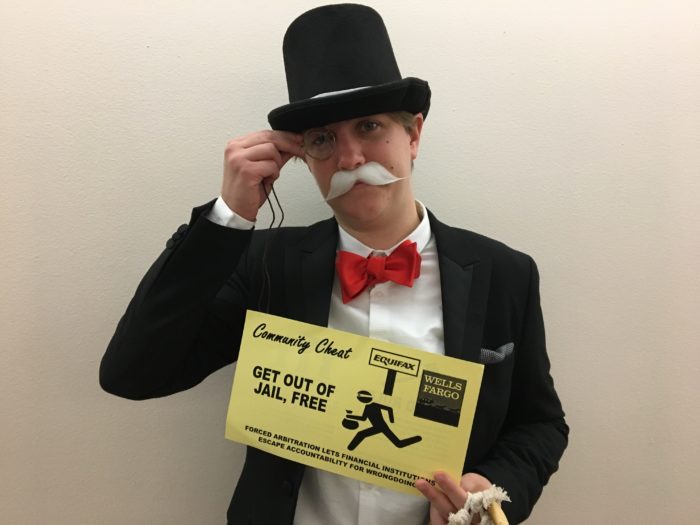 As you may be aware, when I’m not ruminating about political psychology on this blog and on Twitter, I serve as Public Citizen’s communications officer on regulatory affairs. In that capacity, I work on a wide range of issues including stopping anti-regulatory legislation, blocking harmful policy riders that sneak their way into the federal budget process and advancing public protections.

The Monopoly Man’s appearance and the delivery of Get Out of Jail Free cards to all 100 U.S. Senate offices was part of a campaign I’m involved in that is intended to draw attention to the lack of accountability for financial institutions like Equifax and Wells Fargo. In particular, these and other large financial institutions have been using of forced arbitration to block ripped off customers from taking them to court.

Regulations and forced arbitration are both perfect examples of the kind of wonkish policy debates that Democrats and progressives tend to engage in while failing to communicate effectively. As I wrote in a piece explaining the strategy behind the Monopoly Man:

Many of the leading progressive advocates of this era have embraced a communications style that prioritizes research, facts, numbers, statistics, and logical arguments. But as any good political psychologist or communicator will tell you, this bias toward hyper-rationalism is profoundly counterproductive to communication with mass audiences. The Monopoly Man, the Get Out of Jail Free Card and the bags of fake money told a powerful and accessible story that regular people could relate to, even if they didn’t know much of anything about Equifax or forced arbitration.

Human beings aren’t Vulcans. We’re not rational, logical, informed or even particularly self-aware, self-interested or autonomous. The expectation that we are is a myth passed down to us from our Age of Enlightenment for-bearers. It’s an expectation that Democrats and progressives have internalized deeply, even as we’re drowning in evidence to the contrary. Team Blue is so enamored with the reasoning powers of the mind that many refuse to acknowledge its demonstrated limits, particularly as a tool of communication, persuasion and influence.

The Monopoly Man “put metaphor over literal precision, style over substance, image over text, and fun over facts.” In other words, we did the exact opposite of what people on Team Blue usually do. It worked — not in spite of this — but because of it. Indeed, the truth is that human beings are fundamentally irrational and profoundly biased — and in more ways than we’ll likely ever be able to count. We experience and understand the world through emotions, stories, symbols, values and relationships — and those are the things that Amanda and I drew upon in staging this protest the way we did.

The Monopoly Man is an instantly recognizable character, whose appearance evokes far more than just his namesake board game. By placing this character in the foreground of a hearing about a debased financial institution, it intuitively called attention to the predations and excesses of billionaires and big banks. The message was implicit in the situation — no explanation was necessary, even as it called out for one. American culture is filled with familiar characters, imagery and symbolism that, like the Monopoly Man, could be deployed to make a powerful political statement without saying a word.

The instant and mind-boggling success of the Monopoly Man may not have been predictable, and only time will tell whether this specific model of protest is replicable, but it was not a random occurrence. It came from two people who’ve spent years pushing our allies to embrace new, creative and non-rational approaches to activism, influence and political change. The Monopoly Man illustrates what we can achieve when we do.

I believe those new approaches hold the key to a brighter, more progressive, more humane future. And that’s precisely why First Person Politics exists: to show you the way and encourage you to be part of it.